On an otherwise nondescript journey to the Auckland airport this afternoon, we witnessed a spectacular occurrence on Tom Pearce Drive. Nearly every second people mover, van and vehicle used to transport more than 2 people had a Tongan flag or flags, plastered on or flying from the front, short and sides.

What caused the huge delay in traffic was the arrival of the Tongan rugby team or ‘Ikale Tahi,  or Sea Eagles in town, with tens of thousands of their fellow country people, coming to greet them in droves. As well as the visual and sometimes highly original vehicular displays of fervent patriotism for Tonga, there was also vigorous horn beeping and bass-heavy Tongan music blaring from inside most cars, which made us want to sing, “Io, io, io” with joy. If you were lucky as we were, you might even see a van with about 20 red and white balloons taped along both sides of the car, hooning down and beeping with pride.

In the end, we couldn’t find a car park at the airport, which is unheard of as the fans had occupied almost all the spaces and the Foodtown car park was also under siege, as seen here. This is love and devotion on another level. 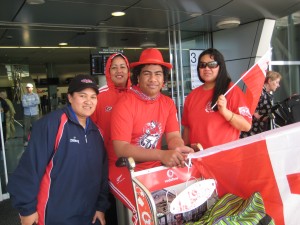 One thought on “‘Ikale Tahi have arrived in Aukilani”